It’s rare to see a band play two radically different types of shows within two days. The first show, amplified and energetic, catered to a crowd of teenagers and college-aged kids, at least some of whom experimented with the party-drug Molly. The second show, acoustic and laid-back, catered to older couples and folks who came to see the band in a more intimate setting. And yet, Grouplove pulled it off.

The Sinclair Show: by Nitesh Gupta

The Rubens opened for both shows; it wasn’t just the shirts from band members reading “The Ramones” or “The Stooges” that made the Australian band feel like a throwback. It was also the lack of skin-tight v-neck shirts, the saggy jeans, the greasy-hair-over-the-eyes look. And then there was the music. On their record, The Rubens made tame, solid, passionate music, but tame none-the-less. At the show, with no blanket in his bass drum, and no fear of breaking the large floor-tom on his set, drummer Scott Baldwin made sure the entire crowd could feel the unbridled energy that did not make it into their studio-produced albums. This wasn’t your typical head-banging music – many times the drums would cut out, yielding a contrast that revealed the more sensitive side of rock music. “She shot me down and left me to bleed with my gun,” lead vocalist Sam Margin sings in his final song.

With a multi-colored, radiant drum set, christmas lights in the background, bright flowers painted on the amplifiers and wrapping each microphone stand, Grouplove completely changed the mood of the night. Drummer Ryan Rabin came on first to drum introductions to all the other members amidst the roaring applause of the audience. Hannah, Christian, Sean and Andrew followed. After less than a minute into the first song “I’m With You,” the dancing and clapping—of both the band and the crowd—had already begun.

Hannah made quite the appearance wearing thin leopard-print spandex. “I’m lovin’ the vibe of this crowd,” she yelled after only a few songs. And the crowd loved her back. She danced constantly, sometimes knees to her chest or to the ground, sometimes engaged in a mini dance-off with another band member, and never shy, of course, about letting her tongue out like an animal.

Christian, with his long, curly hair, and a guitar that read “TRUTH,” might have been one of the hippies referenced in the song “Hippy Hill.” “Shake the floor as much as you can!” he yelled just before the song “Bullet.” Sean, with his famous hat and big hair, both on his face and his head, had his chance to make a speech and yell to the crowd too. During one of the last songs, he plead, “For old times sake, make as much noise as you can, we are Grouplove!” When Andrew did not speak, Hannah spoke for him. “Andrew lost his virginity in Boston!” she yelled. “We make sure to say that every show we have in Boston.”

I loved Grouplove, for, as corny as this sounds, their love for every member of their group. Four of the members performed at the front of the stage, and all shared the spotlight. Even Ryan, the drummer, stuck behind the drumset for most of the show, had his big moment: for the song “Slow,” he came up to the front of the stage with a drum and dazzling, blue-lit drum sticks.  And the wild, energetic and young crowd responded well to a slower song, no longer shaking the floor but swaying back and forth.

After the show, I spoke with Tahlia Sellers, the most loyal Grouplove fan I have ever met. “This was my ninth Grouplove show and the best by far,” she said. 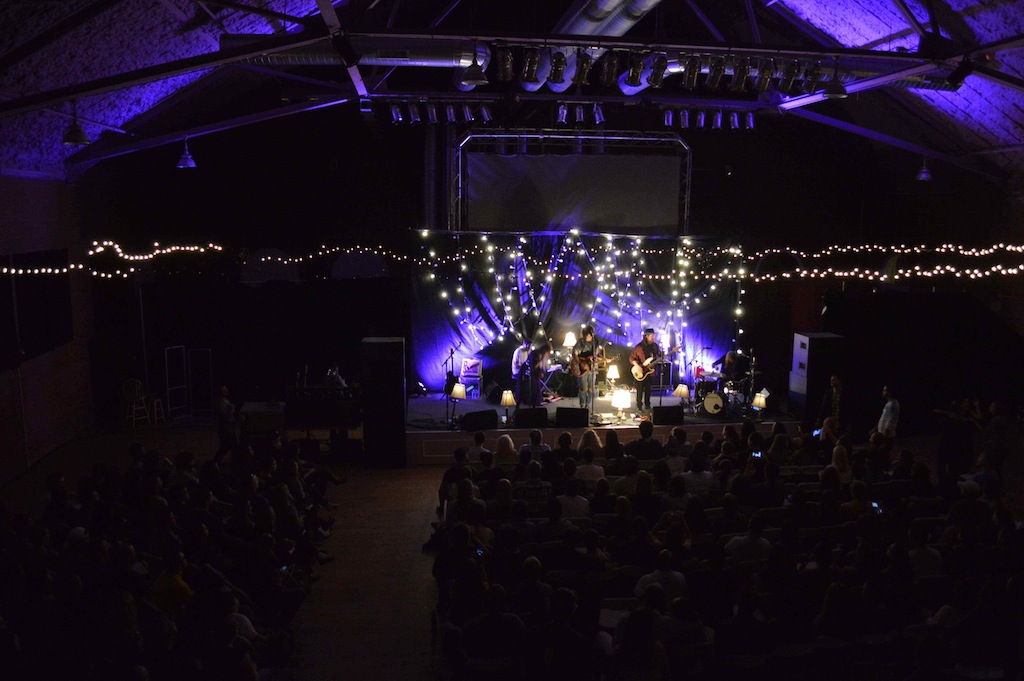 The acoustic set had a much different feel – the audience seemed to be full of couples who wanted to wind down the day with a beer and live music. White bare bulbs, strings of christmas lights and lamp lighting set the mood for a much calmer show than Grouplove usually puts on. Don’t get me wrong, the same energy was there: people clapped along, the audience responded with howls when they played “Close Your Eyes and Count to Ten” and cheered when they adapted the lyrics for their audience, singing “All the way to Boston city.”

But the band noted the difference – as they put it, the lack of “kids going crazy” – and explained that they liked to put on these intimate shows as a way to give back to all those who have supported them. They certainly kept the crowd entertained, throwing in little narratives once in awhile. As Hannah periodically sipped out of her teacup (which actually, had tea in it) they let us in on a few secrets: “Don’t Say Oh Well” was the first song they wrote together and it documents their trip to an artist residency in Greece, where they all met. And when they couldn’t remember which album “Cruel and Beautiful World” was on they laughed to themselves, saying “That’s the kind of secrets you’ll get coming to a show like this.”

Ironically, they decided to play Hippy Hill, a track off their newest album, singing “I’d rather be a hippy than a hipster, what?” to their Somerville crowd, who was recently dubbed as a hipster-filled town. They played a cover of Daniel Johnston’s “True Love Will Find You In The End,” a song that a younger, more hyped-up crowd may not have enjoyed (or recognized). But here, where nearly all of the crowd was sitting, it seemed they all enjoying being serenaded by the band with this older classic.

I applaud Grouplove for their performance – for a band whose music could have been underwhelming without the unharnessed intense energy that is common in their usual performance, they tackled the acoustic set skillfully, adding just enough stories and jokes to keep the setting intimate, and playing a mix of tracks that not only kept the audience interested but sounded good acoustic (if not, better). They even dressed appropriately; no leopard-print spandex was to be found in this hall – instead, Hannah donned a more elegant purple dress and the guys wore casual button-downs.

At the end of the day, we saw the same band, but their ability to take on different appearances (literally and figuratively) is a talent not all bands have. Without losing their catchiness, they were able to put on great, but very different, shows both nights. Check out our Facebook for more photos from the acoustic set.

This site uses Akismet to reduce spam. Learn how your comment data is processed.